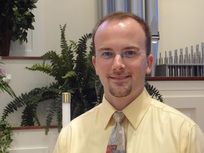 Nathan grew up moving all over Central Pennsylvania as the son of United Methodist Pastor.  He settled in State College, where he attended Penn State University and earned a B.S. degree in Music Education.  After moving to York, PA in 2007, he began his music ministry at Asbury UMC.  In 2008, Nathan helped to establish Main Car Care, an independent automotive repair facility in East York, PA.  He currently serves as their Service Advisor.  In 2009, Nathan joined the staff at Zion Church as a member of  a vibrant music ministry team. He lives in Hellam with his wife, Aimee, and their six children.
E-mail Nathan 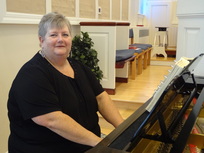 Carol Heagy first came to Zion to play for the children's choir in the mid 1990's.  She is currently the accompanist for the Chancel Choir, Master's Men and the New Day Women's Ensemble at Zion, in addition to being one of the church service pianists.  Carol is accompanist for the York County Jr. Honors Choir and plays for musicals at two local school districts.  Formerly, she was accompanist for the York Symphony Chorus, Chamber Singers and the Phoenix Vocal Ensemble. A York native and graduate of York College, Carol is the director of The Crispus Attucks Early Learning Center.
E-mail Carol

Aimee has been involved in the music ministry at Zion since 2009.  She holds a degree in Music Education from Penn State University.  She taught high school choral music in the York City School District for four years before resigning to stay at home with the Trimmer girls.  Aimee teaches private piano and voice lessons during the week.  Aimee lives in Hellam with her husband, Nathan and their six children.
E-mail Aimee